Welcome to my blog. Thanks for dropping by. Hope you'll stay and enjoy reading about where I've been and what I've been doing!
I don't mean this to be a replacement for personal emails, but it gives me the chance to put up photos and my scrapbook layouts, so I don't block up your in-boxes, or have to send the same photos and stories to everyone separately!
Thanks, and welcome, to the followers of my blog. I'm very honoured that you enjoy it. Drop me some comments from time to time! It's good to hear what you think about the posts. Come back again soon.
Thanks also to Mary of Mary's Mixes for doing all the work on the blog's heading. You are great, Mary!

Where there’s an East Linton, there surely has to be a West Linton, and there is!  I was in East Linton recently, and the other day I had lunch in West Linton, again with Linda.  It’s a very charming old village with a wiggly narrow main street, so you have to take care driving through it as you can’t always see round the bends – wiggles rather than fully fledged bends!

This is a photo  of a photo of the centre of the village in the 19th century, 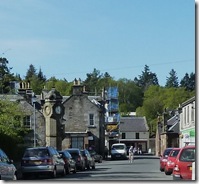 while this is how it looks today - Not a big difference, apart from the cars! 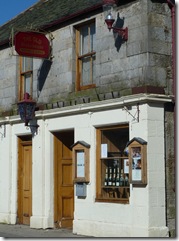 A favourite eating place is The Old Bakehouse, that has gone through several incarnations since it closed as the village bakery and shop more than 60 years ago.  When I was a kid it was a tearoom, where  my parents, sister and I used to end up sometimes, after a Saturday afternoon “walk in the country”.   High tea was a speciality – something that most tearooms did in those days – consisting generally of a choice of fish and chips, gammon and pineapple and chips – everything with chips – ham and egg and chips……. accompanied by a plate of bread and butter, followed by scones and jam and dainty cakes, all washed down with copious amounts of tea.   High teas went out of fashion when restaurants serving meals in the evenings came into fashion, something that just started when I was in my early twenties  However some tearooms are bringing back the old traditional High tea, though they are nowhere near as generous with the accompaniments these days!!!    I must get some photos inside the Old Bakehouse, which hasn’t changed much over the years, thankfully.  The old bread ovens are still in situ with some of the tools of the trade decorating walls and hanging from the ceiling.  The rough walls are painted terracotta now where I am certain they were white in my young day, but the wooden tables and chairs,  even their layout, are the same. 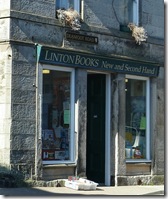 After our lunch we took a stroll through the village, looking into the bookshop with its shelves of new and second hand tomes, and the fireplace shop  - you can see it in the photo of the centre of the village.  It looks straight down the main street on one of those wiggly bends I was talking about - that sells woodburning stoves, or the gas or electric ones that look like real woodburners.

My gas stove in the living room came from here.   As well as stoves they sell lots of nicky nacky things for the home, and  as they had a Sale on I bought a rabbit door stop made of old leather for my doors onto the balcony.  I think he’s rather cute!

You can see this clock tower in the photo up above  It was built above the old Cross Well, and the figure you can see is Lady Gifford, wife of Laird James Gifford, a 17th century stonemason.  This figure is a copy of the well worn original which is now in safekeeping out of the elements.

Another piece of sculpture by Gifford is the marriage stone that is said to have once been above his fireplace, but is now for some reason built into the gable of a cottage on the main street.

At the foot of the village is St Andrews Church, dating back to the 18th century, with the village war memorial standing outside its walls.

Behind me and in the next pic is the war memorial and the old Tollhouse, now a tearoom. 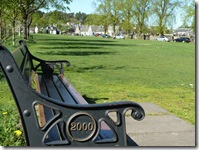 Going to the right of this picture I crossed the lower Green, to the river Lyne, walked over the bridge and along the opposite bank 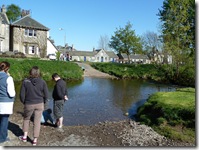 to reach the ford at the top end of the Green.  In medieval days Lyne Water is said to have flowed along the route the main street now takes, so I suppose houses grew up alongside it, but eventually the river’s course was moved  here and the road took its place, hence a meandering road instead of a meandering river. 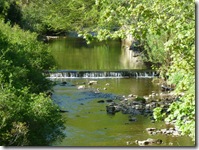 I took the drier route over the wooden footbridge, and took this picture looking upstream. Pretty!  Back in amongst the houses I realise what a mixture of buildings there are along the little lanes and in the squares.

Cottages have had roofs raised and bits added on, to make several residences with outside stairs to the upper floors, as in this little corner.  Love the gate!  There used to be a beautiful art nouveau front door into the house immediately on the left inside the gate, but I suspect the owners have moved house and taken their door with them  as it has been replaced with a very ordinary glass paned door.

West Linton would be a very nice place to live in, but I think I’d have to have one of the old weavers’ cottages!  This one even has a cat flap!  Perfect!

Following the little lanes I finally came to the upper Green which I never knew existed.  I like the cottage here, but I’d remove the wooden porch and build a stone one instead!  Apparently there was once a brewery and also a tannery along here by the Green.  A bit smelly I wouldn’t wonder!  Not now though.  The medieval village has given the place its unique character and appearance and over the centuries it has developed and changed, but you can still see the essence of the place.  I love it!

Evee, I have not been able to read much in the last few weeks, but so glad I saw your blog entry tonight, and enjoyed the tour of West Linton. How I wish I could go to England, Scotland and Wales and walk the old paths and see the beautiful old buildings! Thanks so much for the good pictures (which I enlargened and studied) and the great tour.

You're right, I would love the place it looks great and it even has a river. Can't think why I thought it was a Lothian, I'm putting it on my list of places to visit.
We had high tea in Dysart last month but as you say, they're nothing like they used to be and the cakes were not nice at all, really cheap and nasty!
I'm going to have to find time to look back through the rest of Evee's blog!

Evelyn/Ev/Evee
Peebles, Scotland, United Kingdom
Known variously as Evelyn, Ev and Evee. I retired from work about four years ago! Where has the time gone? Thought there would be lots more time for travelling, meeting up with friends and relatives, digital scrapbooking, blogging, lacemaking and all my new hobbies, but there just aren't enough hours in the day! Continually continuing with home and garden improvements, and maybe the occasional visit here and there.

email me, using "evee's blog" in the subject line

Time of day in Scotland

A gift from Mary! 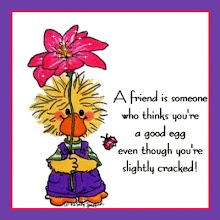 I got an award 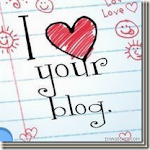 Award from my dear friend, Mary 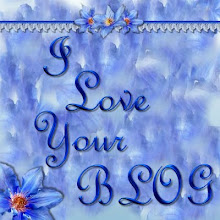 Thanks for the award, Lesley. 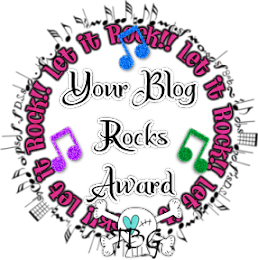 
adopt your own virtual pet!